When planning this week’s menu, I wanted a night that was an “easy cook” night.  Over the past few years Craig and I would take a loaf of French bread (or Baguette) slice it and then slice a wedge of brie, place the cheese on the bread and then broil it until it is bubbly.  Voilà, dinner.
So I totally planned on making just the Brie and French bread tonight…..but, when I was on the elliptical machine at the gym this morning, like a true fat person, I was thinking of what to make for dinner….and decided that since it was 40 degrees outside (Seattle), and looked like it was going to rain, that soup would be the answer to my dinnerdilemma.
The soup is an “easy” kitchen clean up recipe, you all will very much enjoy! 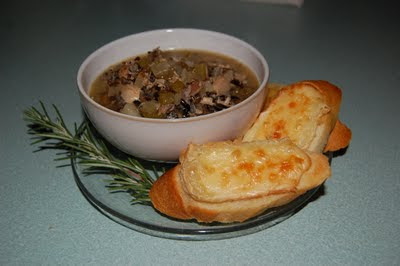 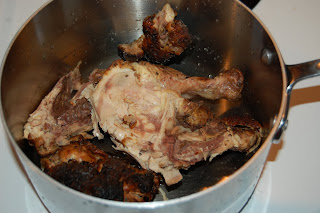 Place cooked chicken in a pot filled with water.  I usually never measure, it depends on the pot I am using. 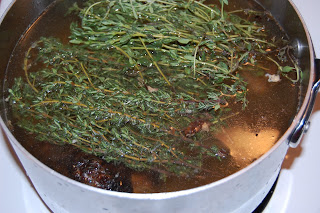 Add a little salt and pepper and the thyme in to the pot.  Boil for about 2 hours.
Once the chicken is “falling off the bones”, remove it from the heat, and drain and save the broth, remove the herbs and discard.  Allow the chicken to cool, then pick off the meat from the bones, then chop.
Lightly sauté the onion celery potato mixture.  Add the chicken and the broth.
Bring to a boil and allow to simmer for about 30 minutes or so. 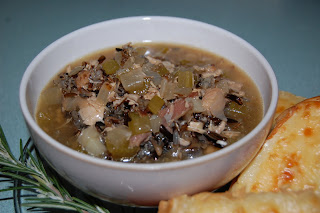 Serve with cracker or French bread.
Substitutions:  Switch out Chicken for left over Pot Roast, or ribs (pork or ribs)