I work in a grocery store.  Ok, so not just a grocery store, a multi-department store.  Ok, so not just a multi-department store, the busiest store in the Kroger chain of 1500+ stores…anyhow, I digress.
Working in a grocery can be a very bad thing for a foodie.  You see, part of my job is to walk every aisle of the store and look for items that are out of stock.  In doing this, I mainly look at “gourmet” items that our warehouse cannot stock, due to the small quantities we sell (well, most stores).
One of the sections that has been particularly of interest to me has been the Indian section.  One of the items is Tikka Masala, from Patacks (you know the one Aarti-Parti does commercials for), well, if you know me, and my stand on salt/sodium, you know that the first thing I do is rotate the bottle to see the sodium content.  Well, I quickly put that Tikka Masala back on the shelf, and walked away, although still intrigued.
So a couple of weeks ago, I was watching a TV show where they makeover a bar, and one of the entrees was Tikka Masala Skewers. Again, intrigued, as I have never had Tikka Masala, but I do love a good curry.
Then last Saturday, I woke up early and was checking my email, when I received one from Foodista talking about tasty sauces for chicken, so when I opened it, one of the items was Tikka Marsala…fate?  I think so…. So I headed to the gym to think about food and recipes while running on the elliptical trainer.  When I was finished my workout, I decided that we were having Tikka Masala, or at least a version of the classic recipe. Instead of cooking the chicken pieces in the sauce, I grilled them on skewers and make the sauce separately.  Then combined them when the chicken was cooked.
Chicken Tikka Masala 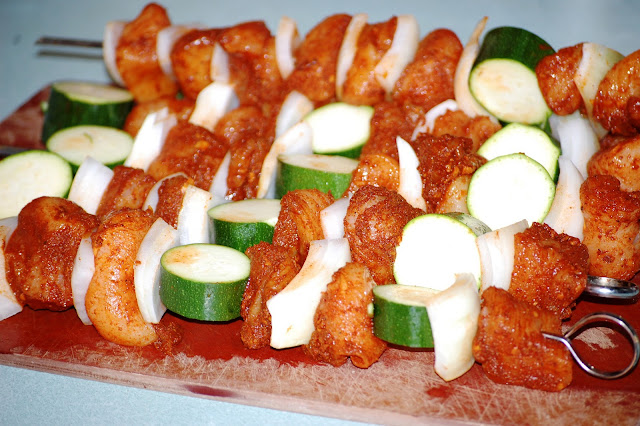 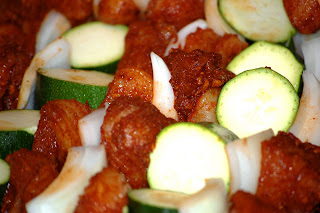 Using ½ of the spice mixture, coat the chicken, allow to marinade for 1 couple of hours.  Skewer the chicken with the zucchini and onion. Grill on low until the chicken is completely cooked.
Meanwhile, in a large saucepan, heat the oil. Add the onions and cook until golden brown. Add the garlic and continue to cook for a minute. Stir in the spices and allow the flavors to infuse.  Stir in the tomato paste. Add the chopped tomato and pour in the water. Simmer and season with salt to taste. Continue to simmer until the sauce has thickened, about 12 minutes. Stir in the yogurt and continue to simmer 5 minutes. (if you heat too high, the yogurt will separate, so keep the heat VERY low!)
Place Chicken and vegetables over basmati rice and top with tikka masala sauce
Garnish with chopped fresh cilantro
Adapted from Foodista

Email ThisBlogThis!Share to TwitterShare to FacebookShare to Pinterest
Labels: dinner